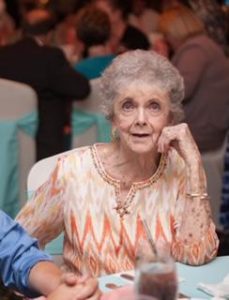 Born and raised in the city’s Kensington neighborhood, Floss was the only child of the late Robert and E. Florence Penrose Stockman.

She graduated from Kensington High School in 1949 and was employed as a secretary in the executive offices of the former Bell Telephone Company until 1954. She married her dashing Marine Joseph J. McHenry in 1953 and the couple moved to Mayfair after starting their family.

Floss was a parishioner of Christ Church in Old City and later a member of the Resurrection Episcopal Church in Mayfair where she volunteered on the Altar committee.

She was a career homemaker and a noted cook. At family gatherings, everyone enjoyed her crumb cake, rice pudding and roast beef and gravy. She enjoyed her Club get togethers, socializing with Joe, his siblings and their spouses.

Floss was widowed at a young age when the love of her life, Joe passed away in 1983. She was a loving caretaker of her parents, family, neighborhood and church friends who needed her help. She loved spending time with her grandchildren who fondly remember playing board games and how tolerant she was of their cheating.

She was predeceased by her oldest child Joseph J. Jr. in 2016 and daughter-in-law Elizabeth McHenry in 2004.

Floss is survived by her children Karen McHenry of Philadelphia, Robert McHenry (Lisa) of Myrtle Beach, SC, Ellen Maxwell (Stu) of Blackwood, NJ, Richard McHenry (Gretchen) of Bala Cynwyd and daughter-in-law Kate McHenry of Boothwyn. She was a proud grandmother to Sarah, Thomas and Joseph Maxwell; Daniel, Maura, Kaleena, Michelle, Gabrielle, Hunter and Dillon McHenry, and Rory Valerio; and her much-loved great-grandchildren: Olivia Pohupka, Aubrey Sherwood, Hogan and Mae McHenry and Tessa and Talia Valerio. She will also be missed by many nieces, nephews and cousins.

Due to the restrictions on public gatherings no services are planned at this time but a celebration of Floss’s life will happen when it is safe for everyone.

Contributions in her memory may be made to: